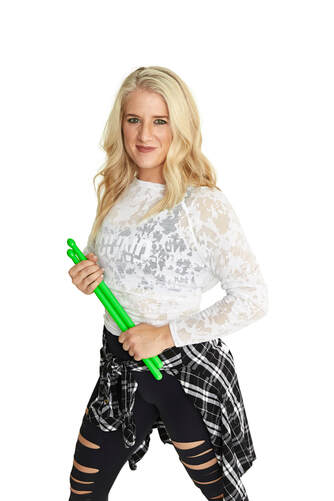 Chelsea Blair, originally from Kamloops, has been teaching alternative fitness classes since 2005. She believes the best way to get fit and stay in shape is to have fun while doing it!

​Her passion for fitness all started when she fell in love with Pole Fitness and became Kamloops first certified Pole Fitness instructor. Before having her two children, Chelsea owned & operated Aradia Fitness in Kamloops for 7 years. In 2014 she again, became Kamloops first and only certified Fly Gym - Aerial Fitness Instructor and Pound instructor. ​ After teaching Pound for a couple months she realized her love of rocking out and decided to focus all her energy on Pound Fitness. 2017 she was invited to be part of Pound Tour Crew. Becoming an official ambassador for Pound Fit.  That same year, she travelled to Los Angeles, to take the Pound Amplify Training. Washington 2018, she became one of Canada's first certified Generation Pound instructors. Her latest training in 2019 was Pound Fitnesses Level Up & an exclusive 3 day Tour Crew training session based out of Pound Fitness HQ in Los Angeles, CA.

Chelsea created Be.you.tiful Fitness as a place to meet other fabulous, like-minded individuals -  all about promoting health, well-being and self-esteem through fitness.  These classes are for people who want to feel confident but don't want to take themselves to seriously! Over the years Chelsea has taught thousands of people all ages, shapes & sizes.